What is Belt Rank Testing? 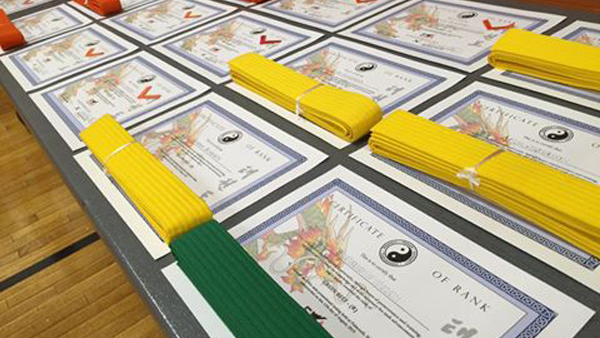 FMA Students are provided the opportunity to half-rank test at the end of each session. Color Belt Ranks are awarded upon successful testing in half color rank increments as follows: Upon successful testing for the first or next color belt rank, the student will receive a new COLOR BELT for the color rank the student tested for. This is awarded as a Color Belt ‘RECOMMENDED’ status, as they will require a second 9 weeks of training to complete a full rank promotion.

Upon successfully testing at the end of the second 9 week session, they will be awarded a matching color rank CHEVERON that is worn on the right sleeve of their uniform indicating a ‘DECIDED’ belt rank status, and at this point they are now considered a full color ranked student for that color rank. i.e., 18 weeks of training and two tests are required for each color belt rank. *See below for more on this.

Occasionally, a student may excel at their training, and exceed expectations set for a given session and as such may be awarded a full color rank in a single 9 week training session. This is rare and will usually only occur for Advanced training students who put in extra time as well as practice, although it is not exclusive to advanced students only.

What is Rank Testing?

During Rank Testing, students are challenged through a series of tests on everything they learned during that session starting with an enhanced cardio workout, followed by endurance drills, TKD skills assessments and the proficiency in executing their Color Belt Form. Each color belt learns a TKD Form (TKD Strikes & Patterns) specific to their color rank that they must execute during testing.

Younger learners are assisted with their Form during the test and are ranked based on their overall performance of the entire test. As the child progresses in rank, their accountability for executing their forms independently increases.

How Does Color Belt Ranking Work?

*All Color Belt Ranks are divided into 2 levels. The first level is referred to as ‘Recommended’ and the second level is called ‘Decided’. For example, when a White belt successfully passes their test, they will be awarded an Orange Belt ‘Recommended’ Rank and will receive an Orange Belt that they can wear upon receipt.

After successfully passing their Belt Rank Test at the end of their next 9 week training session, they will be awarded an Orange Belt ‘Decided’ Rank and receive the corresponding Orange Chevron Patch worn on the sleeve of their uniform completing their Full-Rank Status as an Orange Belt and thus fulfilling their training obligations to achieve Full-Rank classification.

To summarize, two full sessions (or 18 weeks of training) are required for Full-Rank Certification, and the ‘Recommended’ level rank must be earned in order to qualify to test for a ‘Decided’ level rank.

On the last day of each training session, new ranks, belts & chevrons will be awarded during a Belt Rank Ceremony (Graduation Event). The Belt Rank Ceremony is very exciting and is when the students receive their recognition (belts, chevrons, certificates, and special achievements).

The Graduation event is held in either the FMA Parent Room, the FMA Studio, or the Mason-Motz Gymnasium depending on the number of graduates for that particular testing period, and often consists of student demonstrations followed by an award ceremony.

Students are welcome to invite Family & Friends to the Ceremony to share in the excitement!

Testing Fee: $50 payable to FMA prior to testing.